Office for National Statistics (ONS) figures showed that the retail prices index (RPI) hit 3.8% and the headline rate of input prices showed growth of 9.9% in July.

This has raised fears that any recovery in the economy could be stifled as producers’ costs increase hitting the profit margins of business owners.

The pressure on global supply chains has been blamed for the increase of input prices. Increasing costs of shipping and couriering goods is also having a negative affect on small business owners prospects.

As supply chain disruptions continue to persist globally, there are signs that inflation pressures will continue to the end of the year.

JP Morgan's latest global composite PMI report stated: “Price pressures remained intense during July, with rates of both input cost and output charge inflation among the steepest in the survey history. Part of the increase in input prices reflected the ongoing disruption across global supply chains. Increased costs were passed on to clients in the form of higher charges. Rates of increase in both price measures were steeper at manufacturers than service providers. 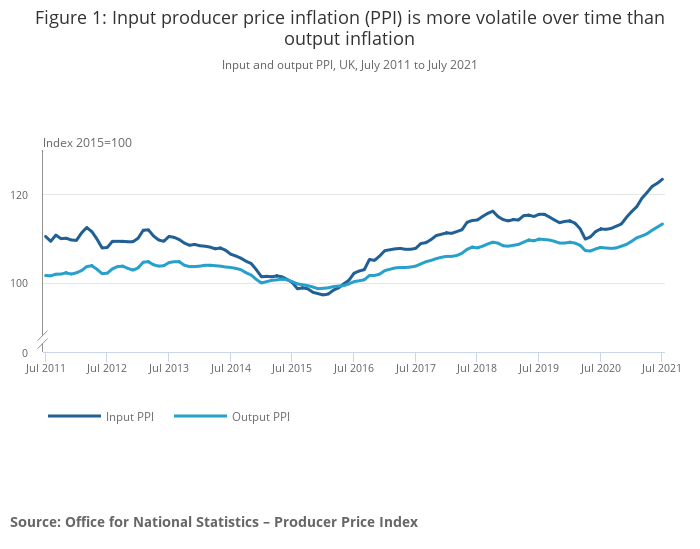 Responding to the figures, Federation of Small Businesses (FSB) National Chair Mike Cherry said:  “Unless urgently addressed, inflationary pressure will stifle recovery among the small firms that make up 99% of our business community.

“While consumer costs have cooled, it’s a different story for inputs, with producer prices continuing their upward march this month. Two thirds of small businesses say operating costs are up year on year, a huge increase compared to the start of 2021, with inputs, labour and utilities all cited as major contributors to that rise.

“Added to the rising cost of goods are the rising fees charged by shipping and courier companies, with many of our international-facing members reporting steep increases in the prices they pay to move goods around the world. Close to a quarter of small exporters have now stopped selling into the EU either temporarily or permanently, citing growing costs and admin.

“A reliable and fairly-priced public transport network is fundamental to the success of the small business community. An RPI-linked hike in rail fares would mean yet another soaring cost holding our employers and sole traders back. Environmentally, small firms very much want to play their part in working towards the Government’s net zero emissions target. A fares hike of this size means for both businesses and consumers that taking the train becomes a strain.

“With firms now having to manage debt repayments, rent arrears, business rates and skills shortages on top of rising prices, the Government should move swiftly to mitigate the effects of soaring costs.

“Bringing down Employer National Insurance Contributions – which serve as a jobs tax in an environment where many are struggling to recruit – would be a good starting point.”

FSB is urging the Government to address rising input prices, lack of access to the right staff and trade disruption as its full Q2 2021 Small Business Index (SBI) report highlights how these trends could stifle a nascent economic recovery.

Among the 1,500 respondents that contributed to the report, close to two thirds (64%) say they’re operating costs have risen over the past year.

Elsewhere, more than a third of small firms (37%) cited access to appropriately skilled staff as a primary barrier to growth over the coming 12 months.

Close to seven in ten (70%) of those in the construction sector cited skills shortages as a barrier – those in the professional, scientific and technical (39%) and information & communication industries (44%) also consistently raised it as a concern.

More on Growing your Business

Need To Know: Your Business Updates for September 2021

Opinion: Critical shortage of skilled labour must be solved

How to develop a business growth mindset

Notes from a small business: To grow or not to grow

My business: Carving out a niche in publishing