The Federation of Small Businesses (FSB) has co-opted a new local champion for the East Midlands region. 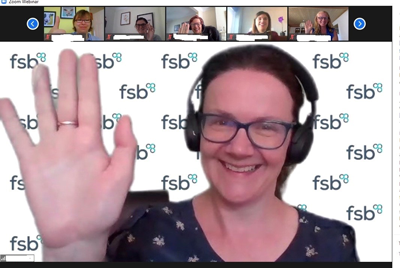 Sally has been successfully co-opted as the new Area Leader, following Clare Elsby’s move to become East Midlands representative on the FSBs national English Policy Unit (EPU) which gathers intel on key small business issues from across the UK. Clare takes over on EPU from Michael Weedon, who now has a national volunteer role for FSB focussing on Growth and Localism, as well as continuing as chair of the FSB’s national Retail and High Streets Policy Unit.

Sally, a consultant Finance Director based in Northampton, joins Jenny Cross, Leicestershire-based founder of Cross Productions and Niche Magazine, as an ambassador for the FSB and its members amongst businesses and local policymakers.

Sally joined FSB in 2019 having set up in business after a senior corporate finance career, and has become a key part of FSB’s local volunteer team, taking a lead role in Northamptonshire on events and providing around 500 local businesses over that time with networking, campaigning and business support. Sally continues to host the FSB’s Northants networking event every month, which attracts a large, diverse and welcoming group of SMEs, and is free and open to all.

Sally said: “I have gained a great deal of personal satisfaction from supporting small business owners through hosting local FSB events and sharing my expertise as a speaker. I am excited about the prospect of taking my involvement as an FSB volunteer to the next level by being co-opted to the Area Lead role as a platform to support and advocate for the small business community.

“There’s plenty to get involved in - from the new Unitary Authorities in Northamptonshire to the reopening and repurposing of high streets, and the need for business support from local and national government - and I look forward to working with the FSB East Midlands team as a voice for small businesses.”

Sally has received the full endorsement of the FSB Regional Chairman in the East Midlands, Les Phillimore.

Les Phillimore said: “I’m delighted that Sally has joined the regional team in such a key role at this crucial time for small businesses, when their voice needs to be clearly heard by policymakers at all levels.

“I very much look forward to working with Sally over the coming months and years. The FSB will always represent the interests of our diverse and vibrant population of members and small businesses to ensure we stay at the heart of the local debate and at the forefront of business policy decision-making.”
Return to listing