There’s an oft-repeated salutary phrase that warns people to be careful for what they wish for, and if the last few months are anything to go by, remote working is arguably one of them.

For despite countless polls suggesting that remote or home working is exactly what employees want, when lockdown enforced it en masse – taking home working from 5 per cent of people ‘regularly’ doing it, according to the CIPD, to near universal adoption for those in the service economy – there were soon signs that it wasn’t the panacea people thought it would be.

Notwithstanding obvious worries about their own and their families’ health and job security, what was immediately apparent were the mental health issues this was creating.

According to a poll by the Institute for Employment Studies (IES) taken during the first week of April, 50 per cent of workers surveyed said they were already unhappy, with a third reporting feeling isolated. In a survey by virtual assistant company Moneypenny, two-thirds of home workers claimed not to have spoken to anyone from work for at least a full day, with a further third saying that this lack of dialogue lasted longer than a day.

“There’s clearly uncertainty in the air anyway, but early evidence about people’s mental health from working at home is showing that this situation is causing additional mental stresses,” says Howard Cooper, psychoanalytical psychotherapist.

“One of the overwhelming worries is people not knowing ‘how’ to work from home. Staff have both flexibility and availability, and this blurring of boundaries is causing anxiety, with people feeling guilty, and under pressure to over-work – with all the mental health issues this creates.”

Data is already confirming this, with the IES finding that 48 per cent of home workers are putting in more hours than they would if they were in the office, while the Moneypenny survey finds that home working is shifting working hours to later in the evening, as people return to doing work after looking after their children. Moneypenny finds that 69 per cent of people are answering calls and work emails after work hours, with VPN providers finding spikes in connectivity demand during midnight-to-3am time-windows.

Michael Learmond, Senior Development Manager (Wales) at FSB, is seeing the impacts of this first-hand: “Calls to our helpline have risen dramatically,” he says. “There is general anxiety about people’s futures, and some of the worries people are having are quite harrowing. A 2017 report by FSB Wales, Going Solo, looking at those who are self-employed, showed SME bosses feel isolated at the best of times – so the isolation will only grow.”

Gosia Bowling, Nuffield Health’s emotional wellbeing prevention and enhancement lead, is also concerned. “Working from home used to be couched as a positive for people’s wellbeing,” she says. “What coronavirus has caused, and will further cause, is a conversation about how much of it is a good thing, especially as predictions are that some bosses might push for this to be normal, to save office costs.

“Remote working can’t be out-of-sight, out-of-mind, as it possibly has been,” she adds. “We’re finding that too intense levels of remote working lead to a lack of trust between colleagues and bosses, which can again impact how people feel mentally about their work. It’s assumed, too, that managers know how to deal with remote workers, but this is absolutely not the case.”

Get the message out

At training provider Hensley Fraser, which had to change its business model overnight to offer training online with at-home tutors, CxO Lynsey Whitmarsh says: “We hold mass online town hall style get-togethers, simply to maintain our culture, but on top of this we’ve also developed advice about how staff can best plan their day while working at home.”

Because poor mental health is a broad church, SME owners shouldn’t overlook the less obvious factors that can cause it by working at home. Most people don’t have the luxury of a spare room they can designate as an office, or an ergonomically correct chair or desk.

“Musculoskeletal problems caused by people on laptops on their couch massively correlate to poor mental health, especially if aches and pains persist and cause more serious physical symptoms,” says Nichola Adams, the self-styled ‘back pain guru’ and one of just 11 specialist technical members of the Chartered Institute of Ergonomics and Human Factors.

“Countless people will now be working from their dining room tables on chairs that are too low, causing people to have to raise their arms and leading to neck and shoulder problems,” she says. “I’ve even seen people resorting to working on ironing boards. It only takes a few weeks of repeatedly sitting in a position for health, and potentially mental health, issues to emerge.”

Current health and safety rules only require bosses to provide appropriate furniture at an employee’s ‘main place of work’, and so debate is already surfacing about employer responsibilities if the home becomes the main location where work is carried out. But it’s quite possible that concerns like this are also the last thing on worried bosses’ minds. While SME owners rightly need to think about the mental health of their staff, some suggest it is they that potentially face the greatest mental health issues if they don’t look after themselves.

“The broader situation caused by Covid-19 is that many don’t know whether their business will survive, even now lockdown measures are easing,” says Mr Cooper. “We shouldn’t underestimate the sheer scale of responsibility many SME bosses will have for protecting the livelihoods of their staff, but not having any certainty about it. This can be potentially crippling to their mental health.”

According to Mr Cooper, SME bosses probably won’t be distinguishing clearly enough between what he calls the ‘laws of the universe, and the laws of desire’. He says: “You might want certainty – for yourself and your staff – but that simply isn’t possible. Bosses need to accept they don’t have the answers and tell staff this. This will free up their own mental health.”

For Danny Collier, MD of Colliers Launches, which runs guided tours of the River Thames and has a fleet of four boats – one of which was used during the D-Day rescues – this is the mental mindset he has had to develop. “Our season has totally ended, just as it was about to start,” he says.

“All the money we earned last year has been spent on repairing the boats and paying wages. But while I’m fearful of the future, I’ve pretty much just had to accept it. We’re not on our uppers yet, and I have a garden. People have things a lot worse.”

For firms that really are struggling, there are organisations out there offering help, if businesses are ready to embrace it. Richard Glynn, founder of 87% – a digital platform dedicated to helping the 87 per cent of people that will have at-work mental health issues – argues the key to helping staff cope is to make the working from home change manageable. “Ultimately, SME leaders need to create a culture that actually acknowledges mental stress in the first place,” he says.

But if there’s one thing to come out of all this, it’s the perhaps comforting fact that, with the right support, poor mental health from remote working isn’t inevitable if managed properly. Workplace behaviour expert Riccarda Zezza, founder of Lifeed, argues that coronavirus will also be remembered as having been the catalyst for employees to learn new skills, and – out of necessity – become more digitally-savvy.

“In the last 12 years, we’ve had no real acute crisis,” she says. “You do need disruption for change. From now on, SME leaders have an opportunity to be more kind, and get rid of bad habits. The comparison I make to leaders managing home working is with parenting: be too hands-on, and people won’t learn. Be there, but provide room for them to make mistakes, and they’ll thrive.”

RCS is a social enterprise based in North Wales that specifically helps employees with mental health issues but, like the rest of the UK, it was forced to transfer its staff to a home working set-up – potentially endangering their own mental health.

“We are acutely aware that for those who struggle with their mental health in normal times, the pandemic and enforced working from home is an additional source of mental distress,” says Ali Thomas, the firm’s Operational Director.

“It’s vital in these circumstances that employers take an individual approach to understand what specific aspect about working from home might impact each employee, and how they can help.

“Our own organisation has bought desks and had them delivered for people
who said they needed them, and because we know some prefer regular communication, we’ve developed a comms plan where we give regular company updates. If there is no news, we’ve actually said this to people, as people don’t like feeling they’re not being told things.”

Other measures it’s introduced for home workers include manager team meetings, held at least once a week, either by Zoom or Microsoft Teams, including training for those using this for the first time.

Communication explaining that work ‘output’ is now different has also been sent out, acknowledging that many workers have childcare and other commitments during the day. “Every Friday we run a virtual team quiz,” adds Ms Thomas. “We also have wellness champions who send out great ideas to people about how they can stay mentally fresh while working at home.” 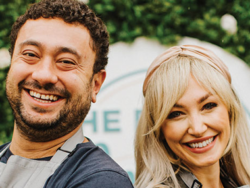 “The signs were there a few days before the UK lockdown officially began,” recalls Adam Chaudhri, co-founder of The Big Bakes, a company that provides baking experiences, with 23 full-time staff and marquees in London and Birmingham. “Bookings got cancelled; we knew this was real.”

The Big Bakes’ staff work entirely in the field and were furloughed from day one – remote working wasn’t an option. This hasn’t meant there haven’t been mental health issues, though. “My immediate fears were whether staff would have jobs to come back to,” says Mr Chaudhri, the former European PR manager at British Airways, who knows just how important communication is.

“It’s easy for a communications void to appear without leadership, so my mobile is available to everyone and I talk to my head bakers every week about what’s happening in the business,” he says. “I schedule phone calls with staff every two weeks, person-to-person, detailing how our finances are to calm things further, and answering any private concerns people might have. Finally, emails are sent bi-weekly, filling in other broader details.”

Some staff had specific mental health concerns that needed calming. “For very new starters not covered by furlough, we said we’d pay their wages out of the company’s reserves,” says Mr Chaudhri.

“Also, because some staff are European, another potential issue was some staff being worried about families back home. So we facilitated them going before flying was stopped, even if it means not knowing how soon they’ll be allowed to fly back.”

For him, such steps are common sense. “Business is about momentum,” he says. “Everything we do is designed to minimise mental stress because we want our people back on song as soon as possible.”

Tips for staying productive while working from home

Five ways to help employees through the end of lockdown

Why wellbeing is big for small businesses