How the UK's small businesses are adapting to survive Covid-19 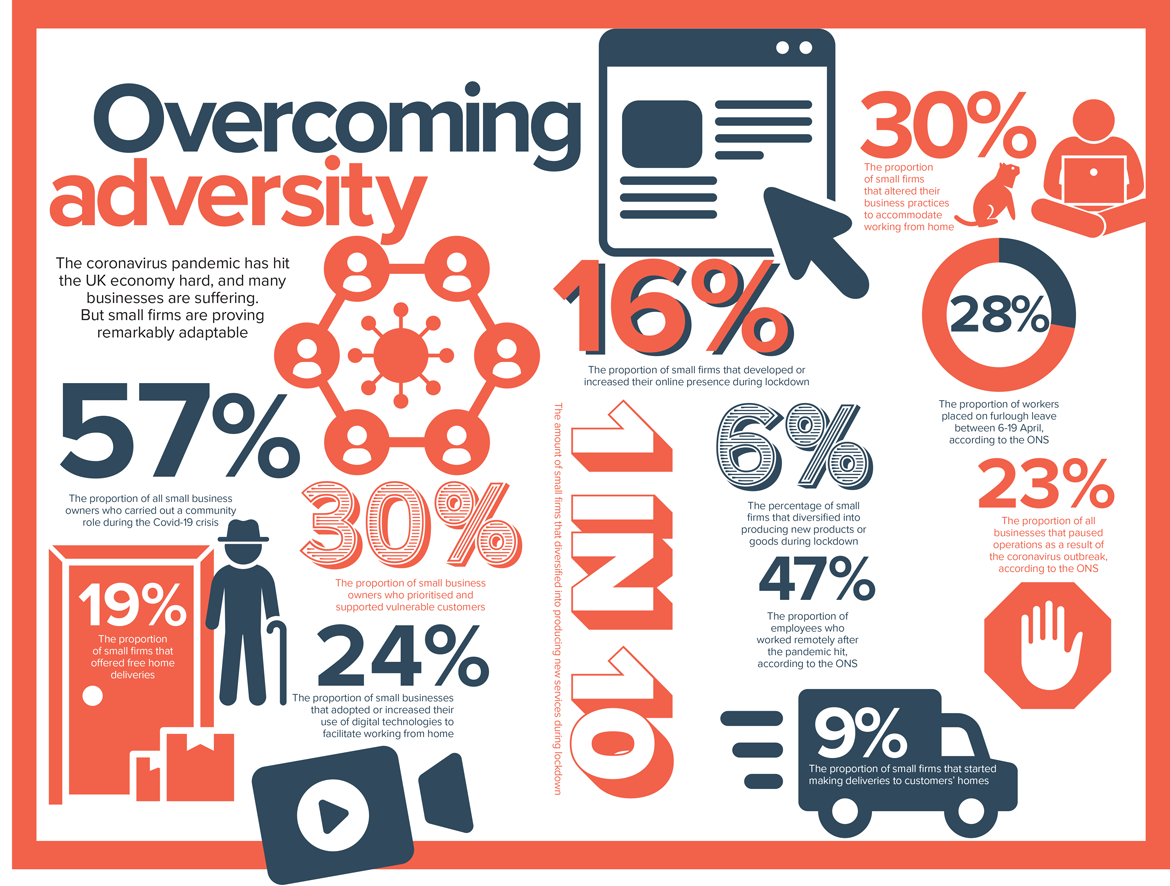 There can be no doubting the economic impact of the coronavirus outbreak, with unemployment benefit applications in May rising to 2.8 million, according to the Office for National Statistics (ONS).

The UK’s gross domestic product (GDP) fell by 2 per cent in the first three months of this year, a period that covers just the start of lockdown. ONS figures suggest GDP slumped by 5.8 per cent in March alone – lockdown began on 23 March – and some forecasters are suggesting a nominal fall of 12 per cent for 2020.

A recession is inevitable, and many small firms will be worried about their ability to survive; research by FSB carried out in May – New Horizons: How small firms are navigating the Covid storm – found 41 per cent had been forced to close by lockdown and, of these, 35 per cent were concerned they may not reopen.

But small firms have proved remarkably resilient in the face of the challenge, as FSB’s report reveals. Many have switched to developing new products or additional services.

Others have taken the time to learn new skills, such as digital technologies, while 23 per cent have provided support to key workers.

Around a third have prioritised their businesses for the vulnerable and about a quarter have donated provisions to food banks. Some have even adopted frontline roles, with 9 per cent signing up to become an NHS volunteer, 4 per cent as a military reservist and 2 per cent returning to a former career in the NHS.

FSB National Chair Mike Cherry said: “These are very uncertain times for all businesses, with futures unknown. Small firms have long been the champions of innovating, adapting and engaging with others, especially during difficult periods, and the current situation is no exception.”

Despite all the concerns, some sectors have thrived.

Sales of TVs, takeaways, home gym equipment, bicycles, books, knitting products and alcohol have all increased as people found themselves with more leisure time and sought to replicate hobbies
and interests at home.

One consequence of lockdown was a significant fall in the use of cars and other vehicles, with transport surface emissions falling by 43 per cent globally at the peak, according to the Global Carbon Project. The organisation estimates around 17 million tonnes less CO2 were emitted every day in early April, compared to normal levels.

All stats are from FSB’s New Horizons: How small firms are navigating the Covid storm report, unless otherwise stated.

More on Growing your Business

Need To Know: Your Business Updates for September 2020

Crisis management: Put a plan in place to cope with disruption

How one SME owner turned his hobby into a business

Notes from a small business: The not so new normal

Need To Know: Your Business Updates for August 2020

Opinion: Now is the chance to rediscover the joy of our local communities