First steps: How even a pandemic didn't stop one entrepreneur from growing her business

The factories in China are running on reduced power so the production is taking longer, and then you’ve got to wait for shipping space, which is at an absolute premium 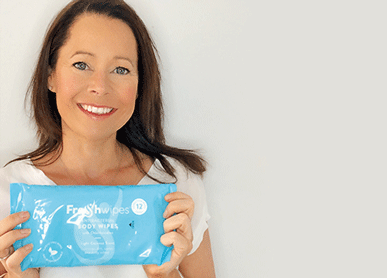 Liz Barnes (pictured) launched SwetWipes Ltd back in 2020, just before the pandemic hit. But while that caused challenges, it also helped to redirect the fledgling firm and make it thrive. Nick Martindale reports.

Q Can you tell me about the business and how it was set up originally?

I was working as a medical rep for a company that sold skin prep products to hospitals, and I got quite into one of the products I was selling, which contained chlorhexidine. It was prioritised over iodine by NICE in April 2019 as the first choice for skin prep in hospitals. I thought a weaker version of this ingredient, to cleanse bodies on-the-go, would be ideal for sportspeople or people who cycled to work and didn’t have time to shower. There were lots of baby wipes on the market but they weren’t designed for adults.

I did a bit of research and worked out what would be a safe level to have in a home product and what the regulations were. I then found some factories in China that would make them for me. It was important to me that they were biodegradable because I could see that being plastic-free was becoming more important. In November 2019 I placed my first order, and it arrived a week before the first lockdown.

Q  How did lockdown impact the business?

A week or two of panic hit! I couldn’t see who was going to buy them, because everyone was suddenly at home and no more than 50m from a shower. I’d ordered enough to last for 18 months to two years but people started panic-buying anti-bacterial products, even though they don’t kill viruses. I was selling 1,000 packs a day through Amazon and eBay. I was still working so I didn’t have to take a salary, so I invested all the profit back into the business and ordered another 20,000 packs.

Q What made you shift the focus of the business?

I got the next order in but had a few weeks without any stock. During that time I got a couple of emails from customers saying they were amazing and they couldn’t use a shower because they were disabled. I thought maybe I was barking up the wrong tree with the sports market. So I changed tack and concentrated on the elderly and disabled market.

We also started targeting HGV drivers who were on the road as essential workers but couldn’t use washrooms because they were shut due to Covid-19. In October 2020 I was doing well enough to be able to take a salary, so I handed my notice in and it’s grown ever since.

Q What do you see as your unique selling point?

We have quite a few! It’s mainly the fact that we make wipes for adults. Baby wipes are tiny in comparison; these are three times the size and more than double the thickness. Unlike baby wipes, our antibacterial agent removes the bacteria on skin that cause body odour. It’s also the level of moisture in them – you can squeeze them out like you would a flannel, whereas baby wipes can be quite dry.

Q Is it just yourself in the business?

Earlier this year I applied for Kickstarter funding, so I’ve now got a Kickstarter employee who does 25 hours a week picking and packing in the warehouse, and a good friend who does a few hours a week bookkeeping around her children. But I’ve stayed away from having full-time employees and paying full-time wages, and I didn’t have any premises until I was 18 months in.

Q You’ve changed the name of the product as well. What was the thinking there?

The company is called SwetWipes but quite a few customers said they didn’t like that. A few of them suggested we call it FreshWipes, because they leave you feeling fresh, so that became our brand name and we’ve never looked back.

Q Is there anything you would have done differently?

I probably could have done a bit more market research to find out whether the sports market would have been big enough. It was a bit of luck that I found the elderly and disabled market, and if I’d stuck with the sports market I don’t think I would have been able to leave my job. Today around 85 per cent of sales is to the elderly and disabled, and about 15 per cent is HGV drivers.

But we are starting to get approached by different sectors. We’ve sponsored a transatlantic rowing team called Team Wild Waves who do two hours on and two hours off and don’t have showers, so they’re using our wipes. In the summer, the camping market made up a significant proportion of our sales, and the Duke of Edinburgh Award also has wipes as part of its kit-list so I’ve approached them about potentially becoming a partner.

Q What’s been the hardest part of setting up on your own?

It can be quite lonely at times – especially in the beginning before I had any staff and no one to bounce ideas off.

Q Is there anything you wish you had known back when you started?

I have had to find out things as I’ve gone along. I have taken on a payroll company and I outsource the reception and telephone answering to a third party as well. That has meant I have been able to scale up without having to take on many staff, which has
been key.

Q What advice would you have to anyone starting out?

Try to keep your overheads as low as possible. If you can, have a few months’ savings before you can start because businesses are like cash-hungry cows at the beginning.

You also need to be prepared for a lot of hard work.

Q What other challenges do you face?

Logistics has just been a nightmare. You used to be able to get deliveries in about eight to nine weeks but at the moment it’s taking a minimum of 16. The factories in China are running on reduced power so the production is taking longer, and then you’ve got to wait for shipping space, which is at an absolute premium. Companies are having to pass those costs on to the consumer.

Q What are your plans for the future?

Customers are asking for variations on what I currently do, such as a smaller wipe to put in a handbag, and I’m working on an unscented one at the moment. I’m also thinking about other products for people in my main market, such as shampoo caps so they can wash their hair without water. Another is a box to keep the wipes fresh and sealed.

New product development takes up a fair bit of my time.

The Queen's Speech 2022 and what it means for small business

Need To Know: Your Business Updates for May 2022